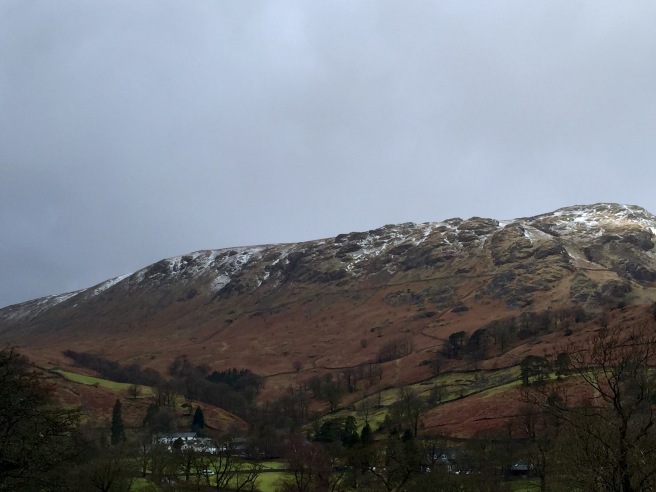 Today was a lot busier than yesterday – we were up at seven and out at nine (after having a pretty good breakfast, I have to say) off walking in an area just south of Keswick. We were out for quite a while and walked up into a corrie (a glacial feature in the tops of mountains). I’m going to be honest and say that the weather most definitely was not on our side, with hail, rain and snow falling upon us… There will be a later blog post contains photos – one which shows a hail storm coming in (which really hurt)!

The walk was difficult – a poor night’s sleep, slippery footpaths and foul weather all attributed to this. However the views were incredible – as we got higher up it just improved and we could see a ribbon lake in the distance (Derwent water).

After we’d eaten lunch in the corrie, we headed back down, crossing a river in our path. That was eventful; my balance isn’t great at the best of time, let alone on wet rocks!

We then went to a glacial feature alongside Derwent water which was extremely steep and muddy, but also had some breathtaking views at the top as it was elevated above the area. After that, we headed back to Blencathra Field Centre to go over some notes that we’d made, have dinner, prep for tomorrow’s fieldwork and socialise with friends.