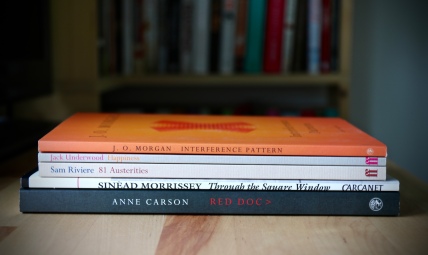 I adore poetry and have definitely been picking up more and more this year. Poetry collections are really short and quick to read, and I’m enjoying picking them up alongside a novel. A lot of the poems I have been reading are by modern poets, as I’m finding it easier to purchase modern collections now (I used to have an issue getting hold of modern work). I may love older poetry, but modern poetry is wonderful as it is so unique and often experimental.

Do you have any poetry recommendations that I should pick up? Are there any poetry books you’d like to read soon?

So I’ve covered both classics and modern classics so far, but I wanted to do a list of five ‘regular’ books that I want to get to before the year ends. My mood is always changing, and the book I most want to pick up today quite probably will be different from the one I’ll want to read tomorrow, though these five are those that I’ve constantly been thinking about picking up.

As with my modern classics list, this could go on. Who knows how many I’ll read eventually, but these are some that are high priority and that I will definitely be taking to uni with me. Do you have any books you want to read before the end of the year?

I absolutely adore modern classics, it is for sure one of my favourite genres. Having so many fabulous-sounding books makes choosing a list of only five difficult, but realistically I probably won’t have time to read any more with my other lists and required reading for university taking up a large proportion of my time.

I do feel with modern classics that it can be difficult to know when a book fits into this genre / category. Obviously having a lot of the ‘Penguin Modern Classics’ editions does make it a little easier to distinguish, however if you disagree and this that any of my choices do not fit this category, then please let me know, though it’s how I categorise them personally!

Are there any modern classics you’d like to get to soon, or have you read any of these? There are so many others I could add to this list (The Bell Jar, A Clockwork Orange, The Virgin Suicides, anything by Vonnegut etc) but it would just be very unrealistic of me to do so.

Format: Hardcover copy sent to me for review by Sceptre Publishing via Bookbridgr

The year is 1918 and in Iceland the erupting volcano Katla can be seen colouring the sky night and day from the streets of Reykjavik. Yet life in the small capital carries on as usual, despite the natural disaster, a shortage of coal and, in the outside world, the Great War grinding on.

There, sixteen-year-old Máni Steinn lives for the new fashion – the movies. Asleep he dreams altered versions of them, their tapestry of events threaded with strands from his own life. Awake he hovers on the fringes of society. But then the Spanish flu epidemic comes ashore, killing hundreds and driving thousands into their sick beds. The shadows of existence deepen and for Máni everything changes.

This book is a short but beautiful read. It’s less than 150 pages, and every word that graces the page feels as though it has been placed there for a reason. Though I did find myself getting lost at times, particularly at the end, this book enchanted me.

I know that this is a translation, so I can’t speak about how it reads in the author’s own words (sadly, the few Icelandic words I recognise are related to volcanoes or glaciers thanks to A level geography), however this reads absolutely wonderfully. The only way I can truly describe my reading experience was that it felt as though I was in a trance. The writing just took me off somewhere else and I felt like I was part of the story. The writing, in my opinion, is what makes this book so special; the plot and characters are good but very simple, but the writing is truly beautiful.

I also adored the setting and time period of this novel (can I even call it a novel as it was so short?!). Back in 2013 I was lucky enough to visit Iceland on a school trip and ever since I have wanted to revisit. It is such a unique country and the descriptions of Reykjavik and other locations were vivid and sharp. Also, it was fascinating as it is set in 1918, yet it barely mentions the First World War, as Iceland wasn’t affected. Instead it concentrates on what was a serious event in Iceland that I knew nothing about; an outbreak of the Spanish Flu. I loved reading about something else from that period, as literature set in those years, in my experience (I could be completely wrong) does have a large focus on the war (not that it’s a bad thing!).

Including LGBT themes in this book made it even more unique, due it being set in 1918. It’s a topic that I find doesn’t usually appear in books set in the early 20th century or before. They were included with respect and without being downplayed, I thought, and it was hard to read at times due to the the treatment people had to face and the way they were forced to behave as a result.

I did get a little confused at the ending, and even though I’ve since read it multiple times to try and work it out, I’m still not entirely sure. However, we’re talking the last page, and the rest of the book definitely made up for my confusion (which quite possibly is down to me either overthinking things or confusing myself, and probably makes perfect sense to anyone else who reads it).

It’s difficult to say a lot about this book as it was so short (definitely not a bad thing at all), but everything seemed to be woven together perfectly and it was such a wonderful story. The character of Máni broke my heart, and though everything was very simply done, it was done in such a way that it spoke volumes.

I remember once going through a phase where I read so many classics one after the other, and I loved it. It’s sad though, as I haven’t picked one up in such a long time; the last one I remember finishing (this doesn’t include modern classics – I read quite a few of those) was back in December. I think it’s partly to do with setting myself a fairly high (but realistic) Goodreads goal – and there will be a post towards the end of the year as to why next year I’ll be setting a very low goal, if one at all.

Later this month I am moving to uni; I know, I’ve mentioned it loads of times. As I’m studying English Literature I feel as though I should read more classics in preparation, though realistically I’m not going to finish anything before I go (unless I sit for three days and read solidly, but with all the packing I have that won’t happen). Instead, I’ve decided to make a list of five classics that I want to have read before the 1st January, 2017.

I’ve actually really enjoyed writing this post (and it’s also helping me narrow down the books that I want to take with me to uni, as the list is way too long at the moment). I think, therefore, that I’ll do lists for modern classics, other fiction, and poetry. Sorry about the absence as well; I fell into a slump (reading / blogging / life in general) and I was lacking ideas for posts. I’m hoping to get back to it with reviews (there may be some up by the time this is posted) and with my schedule (Tuesday, Thursday and Sunday). Are there any classics you want to get to before the end of the year?

August wasn’t a bad reading month in terms of the number of books I finished. The problem was that half of those that I picked up were only okay. However, there were some really, really good ones I read as well. 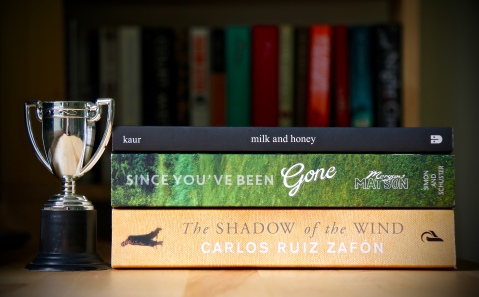 Bronze – The Shadow of the Wind – Carlos Ruiz Zafón

This was such an incredible novel and both the characters and plot were excellently done. I thoroughly enjoyed this and it was perfect as I was bordering on a reading slump when I picked it up.

I read this at the very start of August and loved it. I could relate to it so strongly, and saw a lot of myself in Emily’s character. Morgan Matson writes such wonderful stories and I can’t wait to read more from her.

This. This broke me. And built me up. It was absolutely incredible and so, so poignant. I’d highly, highly recommend this. To everyone.

After failing spectacularly with my August TBR (I mean, I still read a lot so I’m not complaining), I’m keeping this TBR fairly simple. September is also going to be a very busy month; I’m busy for a week and then I’m moving to university on the 24th, which means I’ll probably get very little read later in the month (and the lead up will be spent packing as well). Whilst this list may seem long (it is still ambitious!) I’m halfway through two of the books listed and one is a poetry collection, so hopefully it’s doable. 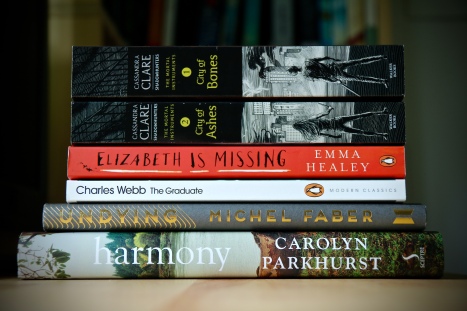 I got sent this very kindly for review and look forward to getting to it, as I don’t think I’ve read a book with a character on the autistic spectrum, or if I have, it was a while ago.

I’ve read parts of this and I know I’m going to love it, I just want to read it when I’m in the perfect mood for it. This poetry collection honestly sounds like it is going to break me though…

I am nearly halfway through and I’m enjoying it, though I wouldn’t say I love it.

I’ve had this for ages, and it’s really short. I am determined to get to it soon.

City of Bones and City of Ashes – Cassandra Clare

I’m halfway through City of Bones and it’s so good – I can’t believe that for ages I said I probably wouldn’t read it. Thank goodness for special offers!