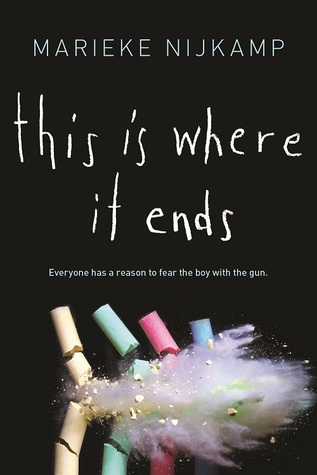 The principal of Opportunity, Alabama’s high school finishes her speech, welcoming the entire student body to a new semester and encouraging them to excel and achieve.

The students get up to leave the auditorium for their next class.

Told over the span of 54 harrowing minutes from four different perspectives, terror reigns as one student’s calculated revenge turns into the ultimate game of survival.

This book was fantastic. I stayed up until 2:30am finishing it because I couldn’t put it down I loved it. That, and I couldn’t leave it hanging. I had to find out what happened next.

I was unsure about the format at first, as it is split up into chapters which cover two minutes of the event at a time. It then alternated between four narrators, who told what happened in those two minutes. However I got into this book and it worked so well, because I never lost track of what was going on at the time and it kept it simple.

Multiple narrators are becoming increasingly common in YA now, I mean a few years ago I read a book with multiple viewpoints and thought how different it was. Not anymore. In some books the multiple narrators just make it confusing and don’t actually add anything to the story. It definitely worked with this plot though, as the characters were all in different places and so you get the stories not only from those in the auditorium but also those outside.

All of the narrators have, in some way, interacted with the gunman (Tyler). For example, one of the narrators is his sister. Because they have this personal insight into the gunman’s character I was able to understand him more, and learn more about the events that drove him to the point where he felt the only option was to attack his schoolmates. With narrators that didn’t have such personal ties, it would have been a lot more difficult to comprehend Tyler’s character and make some sense of his point of view.

The characters were very individual and diverse, in that there were LGBT themes and characters from a range of backgrounds and with different ethnicities. However, (this isn’t necessarily against this book and I’ll probably do a later post talking about this) but I do feel like YA authors may try too hard to get all of these characters into a book where they don’t actually add anything. Something was made of the LGBT themes in this novel, but it wouldn’t have taken anything away if they weren’t there. I do kind of feel as though a lot of these characters were made the way they are to fit in with the current norms of YA, rather than for the story itself. But that’s just me. All I mean by that is that I feel sometimes as though YA authors are trying to tick boxes with their characters, rather than creating them as individuals. LGBT characters are fantastic if they add something to the story; I have nothing against LGBT characters, it just happens to be that theme that I picked to mention, there are others.

I really liked the author’s writing style too. I felt that it was fairly matter of fact, and it doesn’t have all the frills that many authors use but it worked so well with this story and I actually like to read books that are quite blunt (I’m not sure that’s how I’d describe this book, but I enjoy books that get to the point).

The plot was well thought out and everything linked extremely well. None of the narrators lacked plot at any point in the book, which tells me that the author spent a lot of time planning the story for each of the narrators, and she did this well.

I do have to question the time it took for it all to be over though. 54 minutes seems like an extremely long time and the police barely seemed to act, which just seems strange. I may be wrong – I haven’t researched the length of time it would take for a shooting to be dealt with – but 54 minutes does seem like an incredibly long time, especially as the police got the call almost straight away.

I feel that this book is so important due to recent events in the world, and it’s scary that shootings are not uncommon in this day and age. This could potentially be anywhere, and that makes it even more real and even more scary. I’d definitely recommend this novel to people as I think it’s a worthy, fast-paced and interesting read and it definitely shows (though not directly) the effect that seemingly small actions can have on someone you wouldn’t even think they would affect. A definite recommendation, though don’t start reading it in the evening unless you want to lose sleep as you won’t be able to put it down.

I haven’t disappeared completely, but I have been inactive and I’m terribly sorry. I’ve just been so busy at the moment – November was NaNoWriMo and this month I’ve been drowned by essays (honestly I’ve had four and then I’ve had to plan another and my coursework, on top of other homework) but I’ve got half of one left (which I’m putting off doing by writing this) and then my coursework plan (ditto) and then I’m done.

Next week I should be able to read, write and plan / write blog posts (and take photos in this atrocious light), which will be great. I’m getting so many books for christmas / my birthday (the 29th – I cannot wait to be 18!) and I want to get my TBR down.

I have set up an Instagram / bookstagram account for my blog which is @bookographic if you want to follow! I’m trying to do a couple of the challenges on there but they aren’t going so well due to lighting when I get back from school and the amount of essays I’ve had.

I’m already planning my goals for next year in terms of my blogging, reading and writing, and I’m very excited. I’m also starting uni and I cannot wait. This year I aimed to reach a thousand total views on here by the end of the year and I’m on 1,200+ and I’m so grateful to everyone who has viewed / commented / liked / followed this. It means a huge amount.

Anyway, I’m hoping to get back to the normal 2-3 posts a week schedule soon, once I have the time to sit and write reviews again (and actually read books so I can review them – 2 books last month was awful!) It may be January by the time that happens, but I’ll be writing them over the christmas holiday to at least cover January, if not part of February too!

Thank you for staying with me, I promise I’ll get my act together soon! 🙂

Last month was appalling in terms of reading, but I was doing NaNoWriMo  so I feel that that’s a fair excuse! (I’m just going to keep telling myself that). I want to continue working on my novel throughout this month as I’d like the first draft finished before 2016, but it’s not going to be a priority in the same way that it was through November. I’m going to try to read more though this month as well, and I’m sure I can get some more read through the christmas holidays. A lot of these books I’ve started, many a while ago, so I would like to finish some of those off this month, but I’ll list those separately at the end I think as there are some books that I definitely want to read this month.

Ones I want to read this month:

Books that I’ve started and want to finish:

I currently have ten books marked as Currently Reading on Goodreads, the others are The Divine Comedy, which I want to take my time with (but it’s SO good), Les Miserables (which I have to take my time with because it’s so long) and A Midsummer Night’s Dream, which I’ll just pick up when I’m in the mood for it and probably finish it in one sitting!

What do you want to read coming up to christmas? Are you a mood reader like I am and take several books before you find the one that you’re in the mood for or are you one of those lucky people who can pick up anything?