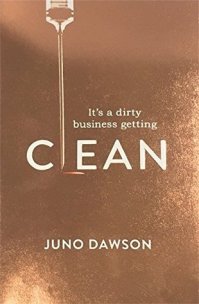 Format: eARC sent to me for review from Hachette Children’s Group via Netgalley (I then purchased my own copy from Waterstones)

She’s wrong. Rock bottom is when she’s forced into an exclusive rehab facility.

From there, the only way is up for Lexi and her fellow inmates, including the mysterious Brady.

As she faces her demons, Lexi realises love is the most powerful drug of all …

It’s a dirty business getting clean …

Content warnings: (they are also listed just inside the book but I struggled with this book at points so I want to reiterate them here) Drug abuse / overdose, addiction (many varieties), eating disorders, mental health issues, self-harm, rehab. There are probably others that I’ve missed as it’s been a while now since I finished this, so PLEASE PLEASE check before you read and look after yourselves!

This book was amazing. I adored it. I did have to put it down for a while around a third of the way through, because it was a difficult read at the time and I needed a break from the Subject. It was nothing to do with the book itself or anything like that though, just how I was mentally at the time.

I freely admit that when I met Juno Dawson at YALC I completely gushed about how phenomenal this book was (thankfully she was one of the nicest people ever and chatted with me about it). Lexi’s character is a complete – dare I say it – bitch to begin with, but she grows so much in the story that I actually kind of liked her by the end, or at least could empathise with her. I loved seeing her change and grow as the story progressed, I felt like I was going through things with her and learning as she learnt.

Juno Dawson is such an incredible writer, and I’m almost ashamed to say that this is the only book of hers that I’ve read – though that will certainly change very soon! She dealt with all the topics covered (and there are a lot of topics / issues covered) sensitively but honestly. Nothing was sugar coated; the scenes were raw and painful and brutal but I felt that they were accurate and carefully depicted.

Lexi was such a good character, I know I’ve already said how much I liked her, but she recognised her own privilege (she’s a wealthy Russian heiress), discussed what it meant to her, and still had her own issues. She screwed up and had good moments, just like any other human being. Juno Dawson pulled out all of the stops writing Lexi and created a real human character, someone who makes mistakes, is a bit of a handful (to put it nicely), and is capable of feeling (and causing) a whole range of emotions.

Like I said, this book is not an easy read, but that doesn’t lower the rating I give it by any means. It was a personally difficult read, and if you pick it up and struggle with it, take a break. I enjoyed it so much more when I went back to it because I was in a better mindset to read it. The fact that is a challenge at times made it more realistic in my mind; life is difficult and shitty and it is not easy to get through problems, especially the likes of overcoming an addiction. It reflected the struggle of the characters so, so well, I can’t fault it for being a hard read.

I wholeheartedly recommend this book to anyone, if I’m honest, though on their terms. You have to put your health first and if it’s not a good choice then that doesn’t matter. Maybe it will be some other time. However, if you feel up to reading it, please DO. You won’t regret it. It was an incredible book in so many more ways that I can even explain and honestly fills me with so much hope too. I was asked why I read books that I find to be triggering, and books like Clean are the reason why. They aren’t ‘oh-look-a-miracle-I’m-cured’, they’re gritty, tough, but also show that maybe, just maybe, things can – and will – get better.

Also, that cover. I’m a sucker for anything rose gold, so it’s pretty much perfect.😂