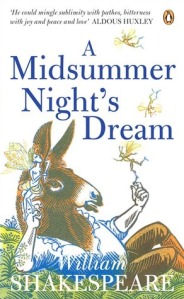 This is definitely one of my favourites of Shakespeare’s plays, second only to Hamlet. It funny, magical and I love the cast of characters. It’s a short play, one of the shortest I’ve read for sure, but it packs so much in and moves very quickly.

I don’t really know how to put my feelings about this play into words. This time reading it was my second time, for uni, though my first was simply because I felt like it. Unlike the other plays I’ve read for uni, it didn’t drag because it was a set text; I genuinely wanted to read it and enjoy it again.

The characters, as in all plays, are what makes this great. A fair amount does happen throughout the play to keep you interested, but the variety of different characters in this are what capture your attention and imagination. As with many of Shakespeare’s plays, there are a lot of characters, far more than you’d perhaps see in a contemporary play. But I found this one so much easier to follow than in the others. They are in distinguished groups, have their own way of addressing each other and it makes for a much more enjoyable experience.

I love this play a lot, and will definitely be rereading it at some point in the future. It’s witty, amusing, and just great entertainment. It’s nowhere near as gritty as some of Shakespeare’s other plays, but in a way, that makes it better, because you can read it whatever mood you’re in (Hamlet is absolutely wonderful and I could rave on and on about it, but even so, it’s not an uplifting, lighthearted read). I highly recommend it, especially as a route into Shakespeare – it’s quick, easy to follow, and fun.