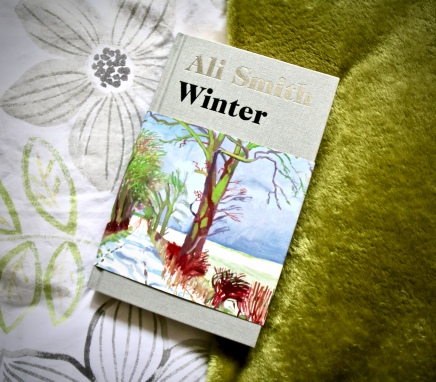 Format: Hardcover bought for me as a gift

Winter? Bleak. Frosty wind, earth as iron, water as stone, so the old song goes. The shortest days, the longest nights. The trees are bare and shivering. The summer’s leaves? Dead litter.

The world shrinks; the sap sinks.

But winter makes things visible. And if there’s ice, there’ll be fire.

In Ali Smith’s Winter, lifeforce matches up to the toughest of the seasons. In this second novel in her acclaimed Seasonal cycle, the follow-up to her sensational Autumn, Smith’s shape-shifting quartet of novels casts a merry eye over a bleak post-truth era with a story rooted in history, memory and warmth, its taproot deep in the evergreens: art, love, laughter.

It’s the season that teaches us survival.

Like Autumn, Winter is a difficult book to review. Though maybe it’s because I haven’t reviewed that much literary fiction.

Nevertheless, this was another enjoyable read. I liked Ali Smith’s writing style yet again, though in this one I found there to be a few cases where I was confused by the digressions, and struggled to follow the main narrative throughout. There are, of course, aspects of the story that are not supposed to make complete sense – they are somewhat fantastical, bordering the line of realistic / fantasy. In a couple of instances I did pause, wondering whether the occurrences were real or metaphorical – sometimes this would be addressed later on, other times it wouldn’t.

The characters did not cross over from Autumn, and so there was a whole new set to be developed. I found the character of Iris to be lacking a something, despite her being my favourite character. The same with Lux. Maybe it was because of the development of Arthur and Sophia I didn’t like them so much (I didn’t dislike them per se, just preferred Iris and Lux). However, none of the characters fell flat, I just felt they could have had more.

I enjoyed the relationships within this story, more than in Autumn. There were a lot of contrasting emotions and beliefs, which led to many challenges, and it was this bit that I enjoyed most. It became clear how the characters had changed and become who they are in the ‘present’, having all of the flashbacks and anecdotes to refer to and expand upon their characterisation.

The social commentary I found particularly amusing. Probably because I agree with a lot of what was being said, but the two sides of the debate were portrayed fairly – in my opinion anyway. Art’s naive questioning and Iris’ brashness were contrasting ways of seeing and challenging an idea, and I liked this aspect. It gives people something to relate to (we also have Sophia’s outright dismissal of ideas – but she does read the Daily Mail so what can you expect).

I’m looking forward to Spring now and to seeing what that holds. I’m assuming Spring will follow – logically it does. I definitely am enjoying these books, they’re something a little different to what I would normally read. I don’t avoid political novels, but I haven’t really read anything about Brexit beside Autumn and Winter, and the not-so-subtle references to various politicians did make me laugh. I’d apologise for that, but I’m not sorry.