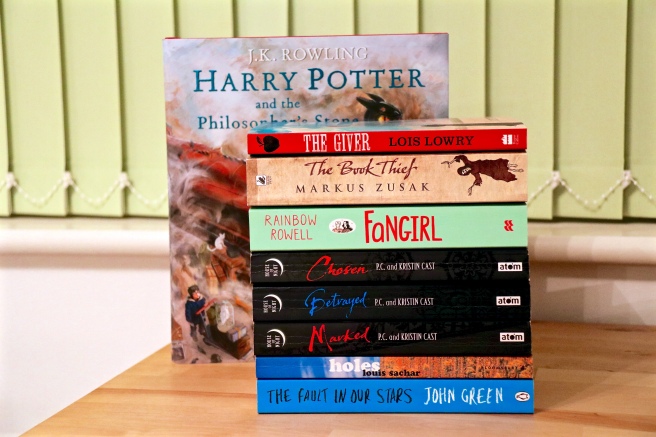 I know it’s quite late to be posting this, but I’ve been watching a few videos or Booktubers talking about the books that they want to reread this year and it got me thinking. I used to reread a lot, but I haven’t for a while now, since gaining a lot more books, but there are some (mainly series) that I would love to go back and revisit, for different reasons.

The House of Night series – P. C. and Kristen Cast

This is one of my all time favourite series. I first read it around seven years ago and I’ve read the earlier books multiple times. I know that it has a lot of mixed reviews, but I started reading it before my decision could probably be influenced and I fell in love with it pretty much straight away. I haven’t reread it for a while now, and I am desperate to revisit the story. I’m considering maybe a book a month as there are twelve, although one month will have to have two, as I won’t get chance to start it this month. I daren’t marathon the whole lot as last time I did that it put me in such a long reading slump because I couldn’t get over the books and I don’t want that to happen again!

Need I explain? Believe it or not, I’ve only read this series once, and I have never read the final book. However, since joining bookstagram / booktube seeing everyone’s posts has made me want to read it again. Also my friend (you know who you are because I’m 99% sure you will read this!) has recently read it and won’t stop talking about it and it’s made me want to read it again!

The Fault in Our Stars – John Green

I don’t know why, but I just really feel the urge to reread this one. I’m one of those people who rarely cries at books (and pretty much never at films) but this one had me laughing then sobbing and then laughing through my tears, and I just really want to experience that emotion again (I know, I’m weird, but I think every book lover has wanted to reread an emotional book over and over again).

I’m going through a George Orwell phase, I’ll admit it. and I really want to read his two most favourite books again. Adult dystopian is one of my favourite genres and 1984 is the dystopian to read. I read both of these about five years ago, so it’s about time for a reread. When I read Animal Farm I read it when I was thirteen and I didn’t fully understand it, not in the way I would now. So I want to read it and appreciate it now I’m old enough to thoroughly understand what it’s saying.

I recently found this book out as I was rearranging my bookshelf (I made a new one so that I can fit pretty much all of my paperbacks on it) and remembered how much of an enjoyable book it actually was. It’s short and a younger book, but I think it will be fun to sit down and reread a book from when I was 12 / 13.

Three books that I want to reread but aren’t such a priority compared to the others:

This book is just amazing. It was the first book that I read in 2015 and it has embedded itself in my mind and I just want to absorb it again. Honestly, it’s fantastically written and a wonderful (dystopian) story which is thought provoking and interesting (my kind of dystopian basically) and it’s really short, so it won’t take long to read.

This is one of my favourite books and I just want to relive the story again and again. I love the interesting narration and the setup of the book and it’s just brilliant. Also, the film is actually really good for this book – I’m not normally a film person and I had such low expectations as I wasn’t sure how they’d work with the narrator but they did such a great job in my opinion and I’d highly recommend it.

This is such a cute book and I love Cath as a character (I love all of the characters to be honest) and I repeatedly see it on bookstagram, booktube and blogs which have all made me want to reread it and fall in love with it again. (But first, I want to read Carry On).

Are there any old favourites that you want to reread at some point this year? Do you reread books a lot or not so often?