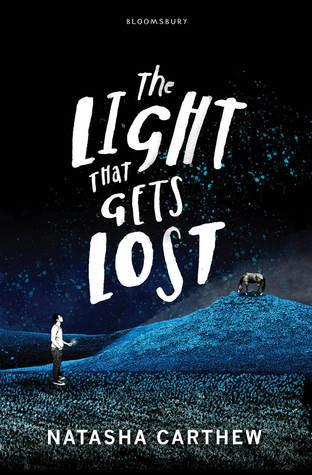 A small boy hiding in a cupboard witnesses something no child should ever see. He tries not to look but he still hears it. And when he comes out, there’s no mistaking. His mum and dad have been killed. And though he’s only small, he swears that he’ll get revenge one day.

Years later, Trey enters a strange camp that is meant to save troubled teenagers. It’s packed with crazies, god-botherers, devoted felons and broken kids. Trey’s been in and out of trouble ever since the day the bad thing happened, but he’s he not here for saving: this is where he’ll find the man who did it. Revenge and healing, salvation and hell are a boiling, dangerous mix, and Trey finds himself drawn to a girl, a dream and the offer of friendship in the dark.

One thing that kept nagging at me as I read this book was that there were references made in this that made it sound slightly dystopian. I don’t know, this could just be me, but reading a book where the world is becoming more violent and the balance of power is shifting etc definitely shouts dystopian to me. I wouldn’t definitely class this as a dystopian though, as it does read very much like a contemporary and very little is learned about the outside world as the story is set in a camp.

If I’m honest, I didn’t like the writing style and I took a long break from this book before going back to it (although the masses of homework I had did not help things) as I was finding it hard going. The writing is choppy and short, and I struggled with the characters and what they were saying too. So many words in their dialogue were shortened or slang, and it made it difficult to read. I’m all for the use of accents and slang, but I think that there is a point when it makes it difficult to read if you’re not from the area that uses such words. (Or just don’t understand the words that they use – even if they’re not specific to an area).

The character development was really very good however, especially in the case of Trey. He started off as a very simple character and throughout the book more and more was revealed about him and he changed and grew as a character, learning lessons throughout. I really enjoyed this change in Trey as it was slowly developed throughout the story and didn’t just suddenly happen, which was good.

On the other hand, I found it difficult to like many of the characters. Lamby, who I was supposed to like, I found annoying (although I didn’t hate him) and the characters that I was meant to dislike really got on my nerves. I did like Kay however, as she seemed the most level headed in the story and her character was needed to stop it seeming melodramatic and over the top in places.

The plot of this story was good and fast paced, with a lot happening. In the earlier parts of the book, these events are all minor, until everything changes around halfway through, when it picks up pace. It’s quite violent, and almost disgusting at points (both in that it’s (kind of) gory (it has a couple of vivid descriptions) and some of the characters were just vile) but these disgusting parts aren’t common.

I did enjoy this book in a way though, and I’d probably recommend it, because a lot of people will enjoy the writing style and thus enjoy the book, as the writing style was the main thing that I disliked about it. It was a good story and it wasn’t very long and I also did like the main characters. The character development was extremely strong in this book and probably my favourite aspect of the story was the change in attitudes Trey goes through and how he changes throughout.