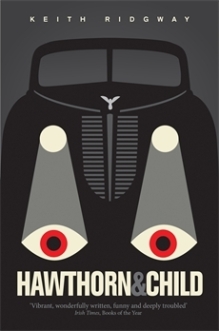 Hawthorn and his partner, Child, are called to the scene of a mysterious shooting in North London. The only witness is unreliable, the clues are scarce, and the victim, a young man who lives nearby, swears he was shot by a ghost car. While Hawthorn battles with fatigue and strange dreams, the crime and the narrative slip from his grasp and the stories of other Londoners take over: a young pickpocket on the run from his boss; an editor in possession of a disturbing manuscript; a teenage girl who spends her days at the Tate Modern; and a madman who has been infected by former Prime Minister, Tony Blair. Haunting these disparate lives is the shadowy figure of Mishazzo, an elusive crime magnate who may be running the city, or may not exist at all.

I actually upped my rating on Goodreads from three (and a half) to four stars after my seminar on this book last Wednesday. I wasn’t sure what rating to give it once I’d finished it anyway, and after discussing it today I realise how interesting it is.

There is no actual plot to this book, and it is split into several short stories / chapters. They do interlink in a few cases, through minor connections, but without the characters of Hawthorn and Child there would be very little to link them at all (and even Hawthorn and Child feel like they aren’t really present in places). However, each chapter is intriguing, and though slightly odd and at times, brutal, it captured my attention and kept it throughout.

There are a lot of trigger warnings that I would have to offer with this book; suicide (very graphic), death (by various means, including the death of a baby), violence, mental illness (unspecified), homophobia, bodily fluids (of all types), and explicit sexual scenes, to name as many as I can think of at the moment (there are probably more). This book is strange, crude and doesn’t hold back. And whilst it is not pleasant to read at times (most of the time), it is incredibly interesting to analyse. Also, the way that it is written is very blunt and matter of fact, and they don’t feel particularly targeted. I’ve probably not worded / explained that very well, but what I mean is that there is absolutely no feeling that the author agrees with what is being said and that comes across very strongly. For example, the subtly homophobic comments come across as detached, and we are led to understand how these comments make Hawthorn (who is gay), feel and the impact that they can have on someone. Everything that is said in this novel (a lot is left unsaid), is said subtly, and the challenging of these terrible viewpoints (homophobic, anti-Semitic (there is a reference to ‘Jew-jokes’, but no such “jokes” are included thankfully – none that I noticed anyway, but it was getting late as I read that part so it may not have clicked)) is definitely there, just not explicitly mentioned. There is the distinct impression that the author doesn’t approve of these comments, though why, I cannot really explain, the way they are written come across as extremely disapproving (thankfully).

However, if you struggle with any of the above-mentioned triggers, this is certainly not the book for you as it is graphic and there are almost definitely books out there that directly challenge these things, or avoid them completely.

I must say that if I read this book for pleasure and in my own, free time, I doubt I would appreciate it as much as I do. There is a huge amount to say about this book when analysed, and what Ridgway is seeking to do is complex and fascinating. It is by no means an easy or ‘fun’ read, as you have probably guessed from the above paragraph.

The form is an interesting choice. It is fragmented, bitty and few questions are answered. It even states in the text that not knowing all of the answers sustains us as humans, and the text itself offers subtle explanations of Ridgway’s choices. Only after looking into it in such detail, scouring every page for recurrent themes and messages, I have begun to understand it – slightly. It is a confusing book. There is no end to be truthful, no resolution. But this book is centred around the idea of the unsaid and the unresolved, and though it feels as though it is lacking, it equally feels as though it is not. It’s very odd, but good. I do feel very conflicted about this novel, and coming back to this review to edit it before I post it, I feel different to how I did before. But the reasons why are almost unexplainable, except that my feelings about this book are as fragmented and disjointed as the book itself.