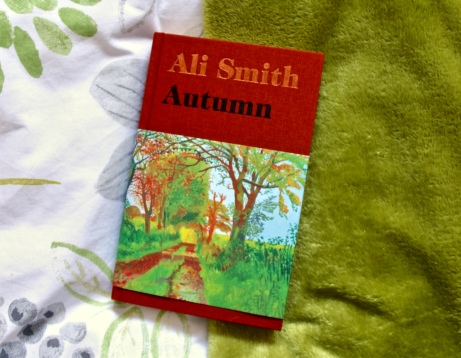 Autumn. Season of mists and mellow fruitfulness. That’s what it felt like for Keats in 1819. How about Autumn 2016? Daniel is a century old. Elisabeth, born in 1984, has her eye on the future. The United Kingdom is in pieces, divided by a historic, once-in-a-generation summer.Love is won, love is lost. Hope is hand-in-hand with hopelessness. The seasons roll round, as ever.

Ali Smith’s new novel is a meditation on a world growing ever more bordered and exclusive, on what richness and worth are, on what harvest means. It is the first instalment of her Seasonal quartet–four stand-alone books, separate yet interconnected and cyclical (as the seasons are)–and it casts an eye over our own time. Who are we?

What are we made of? Shakespearean jeu d’esprit, Keatsian melancholy, the sheer bright energy of 1960s pop art: the centuries cast their eyes over our own history making.

Here’s where we’re living. Here’s time at its most contemporaneous and its most cyclic.

From the imagination of the peerless Ali Smith comes a shape-shifting series, wide-ranging in time-scale and light-footed through histories, a story about ageing and time and love and stories themselves.

Autumn is one of those books that I struggle to review. I thoroughly enjoyed it, and as the first Ali Smith novel I have read (I have previously read some of her short stories), it was interesting to see her writing style in a longer text.

There is something about Ali Smith’s writing style that I really enjoy. It ebbs and flows, digressing in seemingly random places but everything works perfectly. I was surprised at how quickly I read it, but it was because of the writing. Nothing was stilted, though the plot is fairly difficult to nail down. I’m definitely a fan of her writing – though I can completely see why some people may not be – and I will be picking up more of her work in the future for sure. She is a true storyteller, with her words being flaunted throughout the book, and her story is powerful and beautiful.

It’s difficult to review this and talk about the characters and the plot because they all come and go. We do follow their growth and development, but it is so interrupted that it is almost difficult to follow – we just seem to end up with fully fleshed out characters. Effortless, is a good description of the reading process, I’d say. The prominent characters, Elisabeth and Daniel, were well developed and interesting, and I loved their relationship, and the way that grows and changes as the novel progresses.

The social commentary within this book is what makes it so important and relevant. I believe it was hailed as the ‘first Brexit book’ – whether that is true or not, I’m not sure. I do think it captured the feeling of both sides perfectly as they were after the vote. The portrayal of the hostility towards those deemed ‘foreign’ and the way other people responded to this hate, was extremely well done. Difficult to read at some points, but that’s because of it being so accurate.

Overall, I really enjoyed Autumn. I easily got into it, thanks to the writing style. I’d definitely recommend it, as it is very thought-provoking, as well as a generally good story. In the current climate, it’s an important read.