I love watching Youtube videos, and I’ve seen quite a few posts by people sharing their favourite you tubers recently. Most recently, my best friend who runs the blog Sprinkled With Words did one (link here). And so I naturally decided to share some of mine.

Here’s the thing. I don’t like children and I don’t find them particularly cute or anything, but this family is honestly adorable. I’ve been watching them for quite a long time now, and their vlogs are just lovely to wind down and watch.

She’s a British booktuber who seems really down to Earth and reads a lot of similar books (contemporary YA) to me, which is fun to watch. I find her videos a lot more calm than some youtubers, and she’s another I like to relax and watch.

I’m not organised and often need some motivation to actually get down to work. Ruby somehow manages to study for 12 hours straight (I don’t know either, but hats off to her), and it’s a help. She’s also about to publish an ebook, which is pretty fab. 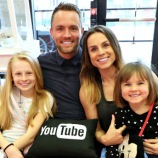 I literally found this channel about a week ago, but I’ve really been enjoying watching some of their videos. They live such a unique lifestyle and are so lovely to watch.

Okay this sounds like a bit of an odd one, but they’re urban explorers. They’re from Yorkshire (if you have even a vague knowledge of British accents you wouldn’t struggle to work that out once you started watching!) and they’re not exactly family friendly in terms of their language. But I’ve got a lot of respect for the way they treat the abandoned buildings (in one video they scared off vandals) and they make some pretty interesting and hilarious videos. They make a pleasant change if I’m feeling like watching something a bit different.

Which Youtubers do you like? Do you have any recommendations? ☺️

2 thoughts on “Some of My Favourite Youtubers”