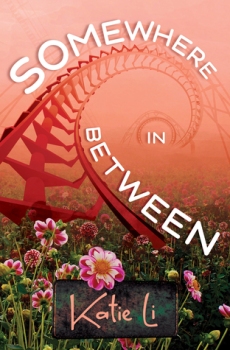 Two friends find a portal to another dimension and use this “in-between place” to avoid the stress of their everyday lives. What they don’t realize is that every time they enter, they alter reality.

Pseudo-punk Magnolia and underachieving gamer-geek Rom are two unlikely friends who only hang out during their walks home together after school. When they find the a portal that leads to different worlds, they use the “in-between place” as an escape from their lives in high school, then later, after college.

Their visits through the portal bring them teetering along a tight-rope of fantasy and reality, where they don’t always believe what is in front of them, not even their feelings for each other.

Inspired by the work of Haruki Murakami and films like Eternal Sunshine of The Spotless Mind, Somewhere In Between is metaphysical coming-of-age story about defining love and finding yourself.

I feel that the best way I can describe this book is confusing. I read it a while ago, and I freely admit that a year of uni has got in the way of me remembering this clearly, but even then, I distinctly remember being very confused as I actually read this book.

That being said, the concept was extremely interesting and I feel as though this book is definitely for someone who enjoys reading books that are ambiguous, odd and have a very fine line between what is real and what isn’t. That person isn’t me, though I still found it interesting. I’m that person who likes my questions answered (although I equally love philosophy, so who knows what I actually like), and when certain events happened in this book I struggled to work out whether the characters were deceived or whether they had actually happened. One thing I can’t stand is being confused by a book. (Again, just me – I’m also very easily confused, it’s actually frustrating).

I found the writing to be quite choppy, with the flitting between times and memories and places, all adding to the confusion. I found myself getting quite mixed up with what was going on and also as to who was who as a result of this. As for the writing itself, there was something lovely about it, though I couldn’t say what – it was just really pleasant to read.

The characters were very unique and I liked their quirks and differences, it made it easier to distinguish between them. Magnolia in particular I liked for her uniqueness and how she stood out from all of the other characters.

This was an okay read, though I didn’t enjoy it so much as I repeatedly got confused and honestly I don’t really know what happened. However it was also enjoyable if you take it for what it is; an ambiguous story where reality is distorted, and that is why my rating isn’t that low. Not everyone would enjoy this, but it’s okay, not everyone has to. If you’re the kind of person who likes a book that is different and slightly odd, mixed up with a contemporary feel, then this is probably for you.