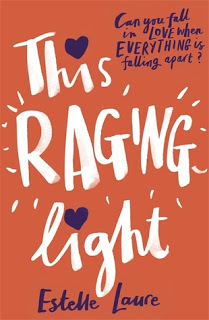 Lucille has bigger problems than falling for her best friend’s unavailable brother. Her mom has gone, leaving her to look after her sister, Wren. With bills mounting up and appearances to keep, Lucille is raging against her life but holding it together – just.

A stunning debut to devour in one sitting, Laure captures completely the agony and ecstasy of first love.

The storyline was gripping and I couldn’t put it down. Definitely a one-sitting read, and I read it in an afternoon / evening because I loved it. I did have a few problems, but honestly, this book was so great (and not just because of the literary references).

Problem? It was a bit overdramatic at times, and I don’t mean the way that the character acts, as that can be a character trait. Some of the events were over the top and I felt like perhaps they could have been dealt with / described in a slightly more realistic way. Although I did love the sequence of events and definitely didn’t see some things coming.

Lucille was a great character, although she did get on my nerves at times with her moaning. However she wasn’t a passive character who let others do things for her, she was determined, got up and did what she had to do, and I love reading about strong characters who can look after themselves (and their little sister) despite their struggles.

I nearly cried towards the end – tears were definitely in my eyes – because Lucille has such a rotten time of it but I adored how Laure showed the compassionate side to humanity too. It pulled at my heartstrings and was so lovely. With so much heartache and negativity that Lucille has faced, it was wonderful to see how others could help her – something that features strongly throughout the book because of her fantastic best friend, but especially later on in the story.

It was slow off the mark, I found, but as the book progressed the story got more interesting and more events happened which obviously grabbed my interest, seeing as I finished it so quickly. The final line though, I was not expecting. But at least the thing that always seems to happen in YA didn’t happen (sort of spoiler: death). That just made it so much better because although so much is left unsaid at the end of this book (sequel?) I liked that it avoided taking the easy route. *Cheers*

Wren, she was so adorable and her feisty attitude had me giggling as she is only a little kid. The way that Laure presented the relationship between the sisters was beautiful and though I have no siblings myself, I could understand and feel Lucille’s emotions and determination to care for Wren.

I really liked this book and it deals with loss and grief and overcoming difficulties very well, in my opinion. I can see it becoming extremely popular. I did like Laure’s writing style, although I found she could be overdramatic at times, but it wasn’t too much that it was annoying, and it was only really noticeable at one point whilst I was reading. Other points were only after I looked back and gave it some thought.

So yes, a worthy read with great characters and a cute romance. (The romance I don’t feel was the main aspect of this book, hence why I haven’t really mentioned it – but it was cute). I feel like this would be a good summer read, or just a great, short book if you don’t want to get into a massive heavy book with school or work etc.