Whenever I go on holiday to somewhere sunny (that makes it sound like a regular occurrence – I wish!) I like to take books that are lighthearted and not too heavy. Having returned from Cyprus in the early hours of this morning, I thought that I would share the books that I read whilst I was there. 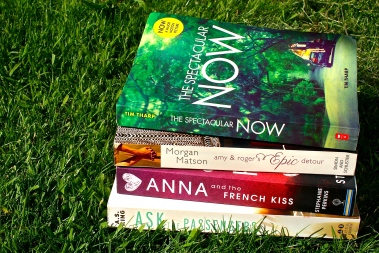 This is the story of Sutter, who lives in the ‘now’, drinks a lot and has had numerous girlfriends and Aimee, who is the complete opposite. Sutter decides to ‘help’ Aimee and they end up in a relationship, to keep it brief. I was probably the most excited to read this book out of all of them, however it turns out that this is my least favourite due to the narration style reminding me of that in ‘The Catcher in the Rye’, which I greatly disliked. The narrator appears to me as quite self-obsessed and it irritated me, as well as making me feel desperately sorry for some of the other characters. I think that this is partially why it reminds me of Catcher, because the narrator is very impersonal and spontaneous, moving from one thing to another with a careless attitude. I didn’t feel that the ending really completed the novel at all and as a result left me feeling slightly disappointed more than anything. I felt as though there were a lot of ends left open which the author could have tied up and told the reader what happened because I didn’t feel as though the novel had actually finished! Overall, this book left me feeling more confused than I would have liked and asking questions that I felt should have been answered in the novel. However, despite my personal distaste for the narrator and his attitudes, the fact that this book isn’t too sad or heavy does make it a good summer read if you don’t want to have to focus too much.

The title implies what this book is about; Amy’s mother moves from California to Conneticut leaving Amy alone to move once the school year has finished. The original plan is for Amy to fly however in order to get the car across she ends up having to drive across  the USA. Amy doesn’t drive (for reasons that are disclosed in the book and to say would be a spoiler) and so her mum enlists the help of family friend Roger (who is a year or two older than Amy) to drive. They decide that they don’t like her mum’s planned route and so make their own route, taking them through several states. This book is such a great summer read as it talks about travelling which makes it a perfect to read on holiday. There are images scattered through the novel that are part of the diary Amy writes in which helped to keep track of their journey and made the book extremely easy to follow. The characters were both likeable. Yes, Amy could be a little frustrating at times but other than that it was a good story, especially on holiday. There are parts that are slightly heavier but to be honest, they added to the storyline and so made the book more interesting. The one thing that did irritate me slightly was the fact that some of the main information (trying not to give spoilers here) about why Amy doesn’t drive is not given until near the end of the novel. This is a good feature as the reader really wants to find out, however I did find it rather annoying at times because I just wanted to know! But then again, it did has its desired purpose and made me want to read on, so I guess it worked!

Anna finds herself being forced to move to a boarding school in Paris for her final year of school. Here she finds herself feeling isolated due to the language barrier and not knowing anyone. However she quickly forms friendships, in particular with Étienne St. Clair. I would have to say that this is most definitely chick-lit and very much a romance. It is very ‘sweet’ and although I’m not always into books which are solely romantic (usually there has to be some underly ‘deep’ theme). Obviously there are a few twists and turns throughout the novel, it’s not completely upbeat and positive throughout, though these are not frequent and therefore I found this book to be really enjoyable when sitting, relaxing and doing nothing! Being set in Paris, this novel has a slightly exotic feel and made me desperately want to visit again (I fell in love with the city when I visited it last year). Some of the places mentioned I had been to so I was able to relate more and it seemed even more real. This is one of those books that I would reserve for holidays and times when you want to escape stress because it is a really easy and relaxing read. Of the four books that I read, I’d say that this book is the most lighthearted and the easiest read and therefore the most summery. I found it easy to like all of the characters (except the ones that you are supposed to dislike) which made the novel far more enjoyable as it is always good to have a novel where you aren’t frustrated about not liking a character you’re supposed to!

Ask the Passengers – A. S. King

This is the story of Astrid, who is discovering and questioning her sexuality. She finds solace in talking to the passengers on the planes that fly overhead as she feels that they do not judge her. Some of the characters in this book were too easy to dislike, although I got the feeling that I should actually like them. Dee, for example. At times she comes across as a really sweet person (nearer the end mainly) whereas as other points she shows Astrid little respect and I found that irritating. Astrid’s mother is also one of those characters who instantly got on my nerves, although I think this is supposed to be the case. However, I actually liked Astrid herself and though she could come across as whiny and a bit selfish at times, she also was portrayed as honest and down to earth, making her a relatable character. This book has a central focus on philosophy, as that is Astrid’s favourite class. As I actually study it myself I understood some of the references made in the novel, but I did find that they were sufficiently explained in the simplest way. I kind of wish that I’d read it before my exams as its summaries would have been so useful! I’m not sure that I would read this again if I’m honest, mainly because of my dislike for some of the other characters, however for a summer read I did find this a really good choice because it wasn’t too serious, despite the events that in reality would be deemed so. Having said all of that, I did enjoy this book and read it pretty quickly because I didn’t want to put it down. There are a large number of plot twists throughout the novel to keep you interested which is something that I would consider extremely important, especially if the characters are slightly lacking.

3 thoughts on “What I Read on Holiday”